The audio recording (here) and transcript (below) are the final seven minutes of the two-part chat I had with ‘B’, who’s a queer, Greek (Caucasian), woman (cis), who, at the time of interview in June 2021, was 32, partnered, and living in London.

We’d already had a meandering conversation which addressed queerness, patriarchy and pleasure politics, and the extract I’m sharing here picks up a thread that directly references question 14 of my sexuality survey: “Is there anything you can remember that sparked your sexual / intimate desires, e.g. a certain person /  a film / a song / an advert?”

Almaz – 23:46mins
Let’s just go back to… you said… the question is talking about “is there anything that you can remember that sparked your desires, e.g. a certain person, a film or a song? Roughly, at what age were you when this happened, and how did it feel?” And you’ve said “five or six”, so I was just wondering whether you can remember exactly what it was?

‘B’ – 24:17mins
I remember very vaguely there was this comic, a series of comics, by a specific artist. And there was…
[chuckles]
It’s so funny to describe. But there was a prisoner.

‘B’ – 24:37mins
And it was also, like, described in the comic strip as naked women and…
[chuckles]
I can’t remember exactly what the text was and how it was described, but it felt that this is something that I shouldn’t talk about. So I don’t know if this feeling that it was a taboo subject made me notice it even more, but I remember that it felt sexual, already. So this is one of the first things I remember.

Almaz – 25:39mins
So, it’s really interesting, because at the moment, I’m thinking quite hard about the fact that we don’t yet have a vocabulary to label and discuss juvenile sexuality. And we all have these feelings from being very, very, very young. But when you start saying to people this, they are kind of like, “Oh, but…” …but they’re saying that, “Oh, but it’s adults that force this upon children.” But I don’t think it is. I think that we create our own narratives, as young people ourselves.

And again, I think that, obviously, adult culture does help shape that. And, like, as you said, it was something you that kind of knew it was taboo, but, it still sparked something. So that is… I’m really trying to delve into that. And also, interestingly, there are many people writing a range of media [in their survey responses], so not just standard adverts, or music videos, or people like older brothers in the community or whatever. But so many people are saying Disney films like Aladdin. And so many people are saying… Yeah, as you say, like, a comic, or something that’s fairly abstract. So it’s really making me see that there’s a real vast amount of stimuli that give us these desirous feelings.

‘B’ – 27:30mins
Mmm-hmm. But I also remember my first… it was probably… it was before that comic strip even. The first… Yeah, it’s funny how once you start talking about these things, they come, they appear in your brain. The first sexual play with a kid, I mean I was a kid as well, was when I was… Maybe it was around the same age five, six, seven, something like that. And my dad was working in and I didn’t have school, and he took me with him, because he was going to visit, a house with a grandma who was living with her, or like, child-sitting her granddaughter, and we’re the same age.

So he took me there. And I remember that with this girl, we played in an obviously sexual way. And it felt like that as well…

‘B’ – 28:38mins
…super clear and, probably, that preceded every sort of media content, and I completely agree with you about their sexuality, juvenile sexuality, I think it is a super difficult topic.

‘B’ – 29:26mins
…complicated territory. But also… it’s a very… I think… it’s very difficult to talk about because culturally we idealise children as, like, angels that are so pure…

‘B’ – 29:42mins
…and you know, inherently good and, you know, this so not realistic, flat view of what children are. At the same time, our culture is borderline paedophilic…

‘B’ – 29:59mins
…which is another, complicated thing that it’s… it’s very difficult to talk about. And there is this duality that if we somehow agree that children have a sexuality, this is going…

‘B’ – 30:15mins
…to be very dangerous. With the tensions, the current tension of our culture, I think. But yeah, talking about ourselves, I feel that we all agree that we can remember things from very early on. Even if now when we think it, we try to see them as… Yeah, I don’t know how parents deal with this, with their kids, for example, I think that the majority of them just completely avoid the topic. Yeah. Which I find interesting. 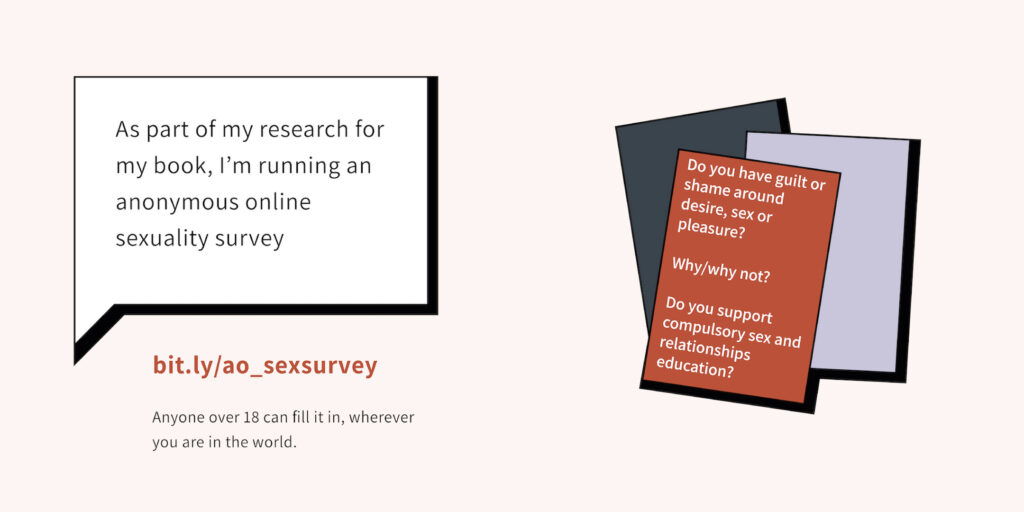 [Image description: White speech box with black border shadows. Black text ‘As part of my research for my book, I’m running an anonymous online sexuality survey’. Dark orange text ‘bit.ly/ao_sexsurvey’. Black text ‘Anyone over 18 can fill it in, wherever you are in the world.’ Picture of coloured rectangles placed at angles with black border shadows. White text ‘Do you have guilt or shame around desire, sex or pleasure? Why/why not? Do you support compulsory sex and relationships education?’ on top rectangle]

The sexuality survey is still open, so in the meantime please do fill in/share it as all of the responses are helping me make connections between the ways in which we’ve been socialised and our relationship to sexuality.