I’ve been writing erotica for 14 years, which is, in fact, longer than the length of time I’ve been having partnered sex.

When I was doing press for Kayleigh Daniels Dated, I was most often asked about my creative process in terms of writing all the hyper-realistic sex scenes. And then, the follow-up question was always, somewhat inevitably: “Do you base them on your own experiences?”

I’d say “No” to begin with, and a quieter “Yes, kinda” to follow. I’ve previously written and spoken about how I mined some of my own experiences and planted some elements of myself into Kayleigh’s stories; but had glossed over my writing process itself, and how I found myself transforming all kinds of bodily functions into compelling vignettes.

So, I’m telling the story from the very beginning…

There once was a little girl who grew up in a provincial town in the north of England.

She had a very, very vivid imagination and began storytelling as soon as she started talking. She went to school, where she learned to hold a pencil, write on her own name, and read fairy tales.

The storybooks transported her out of humdrum small-town existence and into new and exciting worlds with incredible people who led extraordinary lives.

And read, and read… and, yeah, read just about everything she could get her sticky little hands on.

Pretty soon, she was scribbling adventures of her very own, magicking up fantasy worlds and filling them with a whole host of fascinating characters and outlandish creatures.

She could sit quietly for hours on end, engrossed in the imaginings of hundreds of writers.

It was only a matter of time before she stumbled across *whisper* naughty stuff. She got the same fluttery feeling in her tummy which had surprised her as she watched that Jack and Rose scene in Titanic. After that, she decided she’d see what else could lead to that feeling.

Could it be connected to some of the things she’d read, but only half understood, in her Where Do Babies Come From book? But wait a minute. She was very confused. How could that feeling, which happened when she read those snippets about beautiful people touching each other all over, be related to a mummy growing a baby?

She just could not work it out.

It didn’t matter much, though. She carried on reading books with naughty stuff and was, by now, recommending the best passages to friends, too.

By 13, she’d got all the sex stuff straightened out in her head. But she still couldn’t understand why it was something she wasn’t supposed to talk about. There were lots of boys in school that she thought were drop-dead gorgeous. She’d sometimes spend whole lessons thinking about how she would go about convincing any one of them to stick his hand down her knickers and kiss her *with tongue*. Why even attempt long division when you could daydream about [insert generic Caucasian boys name here]?!

She was captivated by Bridget Jones’s antics. She completely and utterly saw herself and all her desires reflected in her, even though she herself was still only a schoolgirl. She could imagine herself making bad decisions about ‘Fuckwits’ (she never fully understood what ‘Fuckwit’ meant…) and living a gloriously chaotic life in London.

Finally, the time came for her to get her head down. A-Levels had begun. In English, they were set The Colour Purple. And *Oh My God*, she had to read those Celie and Shug bits out loud in class. She wouldn’t mind a bit of Shug, she secretly thought.

Outside class, she went on to read DH Lawrence’s highly controversial Lady Chatterley’s Lover and Ian McEwan’s much-celebrated Atonement. Properly steamy. She lapped it up. And then his freshly published novella On Chesil Beach, too, which describes the wedding night of a young couple in the early 1960s in excruciating detail. The social codes of the era meant that the pair had no realistic expectations of what it would be like and were disgusted and traumatised by the experience.

She had a strong reaction to it, even though she herself had yet to make her sexual debut. She was appalled at the lack of sex education, harmful cultural expectations and woeful communication depicted in the novel.

Fast forward to Autumn 2007. She was on her gap year but still hadn’t done penis-in-vagina sex (or ‘PIV’, as it’s called in sex ed circles), as she couldn’t find a partner, a hot enough partner, who was willing to do the deed with her.

One weekend, she took herself off to stay with a friend at a University in a far-off city, and they hit the club scene, where she met a boy on the dancefloor.

They snogged so enthusiastically her jaw ached. He wriggled his hand down her top and squeezed her nipples really quite hard. It felt delicious.

On the long train ride back, she played the scene over and over. She took out her notebook and wrote a sexually charged fantasy inspired by her memories of that thrilling evening.

And here’s what she wrote all those years ago in November 2007. 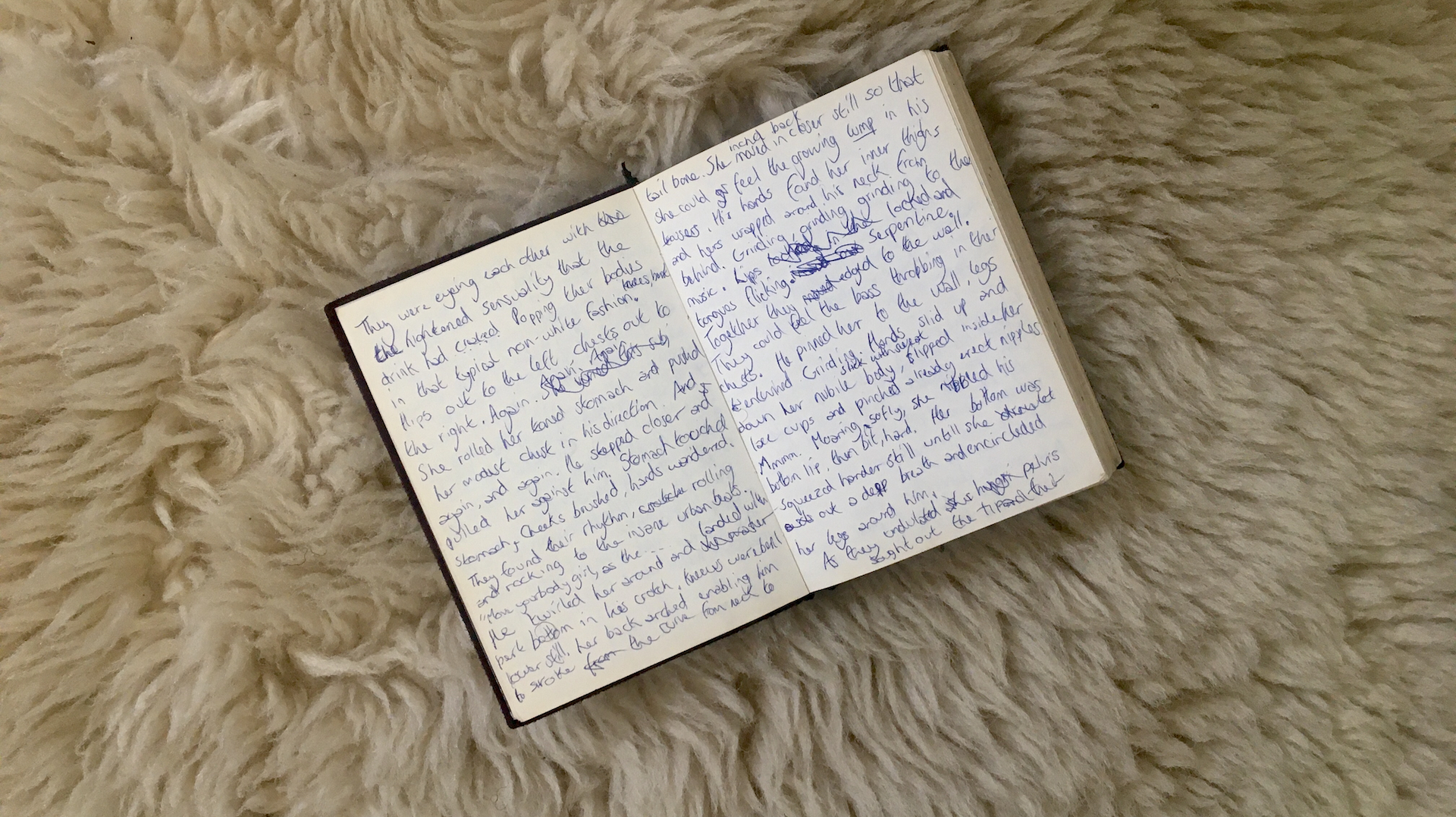 At long last, the girl did find someone to spend a night with her. And, yeah, she was blessed, it was pretty damn amazing. She had such a great evening that she didn’t leave his bedroom for a whole weekend. She liked it so much that she couldn’t imagine doing it with just him for the rest of her life. There were just too many beautiful people in the world that she wanted to touch! She made it her mission to have as much fun with her body as possible. And with her stories too.

To nobody’s surprise, she grew up to be a writer and sex educator (which, actually, did surprise lots of people). But as to whether she gets her happily ever after… Well, she’ll be the one to decide that…

In my very first attempt at erotica, I had instinctively used a technique called ‘embodied writing’. In her 2011 article ‘Embodied Writing: A Tool for Teaching and Learning in Dance’, dance theorist Betsy Cooper defines embodied writing as: “vividly descriptive writing inclusive of an array of sensory mechanisms such that a kinaesthetic and visceral experience unfolds during the act of writing and a sympathetic response ensues for the reader.”

However, I’ve found it difficult to visualise how all the different body parts are acting and responding, so I have two posable artists mannequins on my writing desk that I use to help choreograph the action. 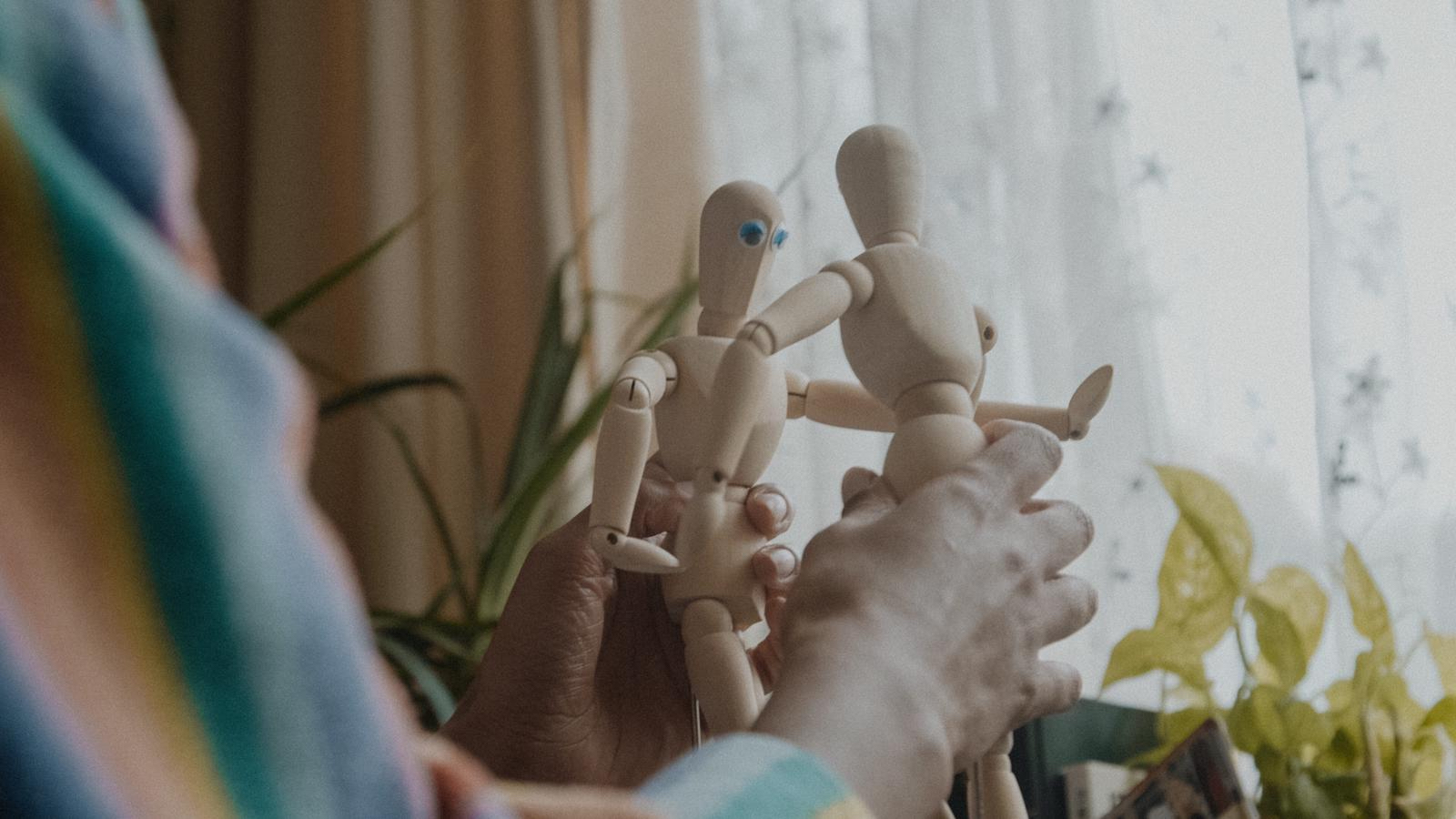 I’ll save down any fragments which don’t seem to work in the particular story that I’m working on. But if I feel that they still have some merit, I’ll recycle to use them in another scene in a different story.

Some things I’ve learned along the way…

Always make sure you’re writing something that others can see themselves reflected in, and can relate to.

Spotlight how a character’s individuality can be carried into their sexual communication style. Characters should express their pleasure and ask for what they want in ways that feel true to their personality.

Focus on realistic dialogue; our sentences are often fast-paced and imperfect. So, um’s and ah’s work really well. And we use slang and dialect vocabulary all the time.

I’ve distilled all the practical elements of writing erotica into a 75-minute online workshop, so if you’d like to learn how to harness some of your own experiences, secrets, and fantasies to create engaging narratives, find out more via eventbrite, and book yourself into the session which is taking place on Wednesday 17 March. My four-part series ‘Developing sexual expression and understanding intimacy’ is running weekly from Wednesday 17 March until Wednesday 7 April, so if any take your fancy, do book tickets.

It goes without saying that reading makes us better writers, so here’s a list of work that has influenced my particular brand of embodied writing.